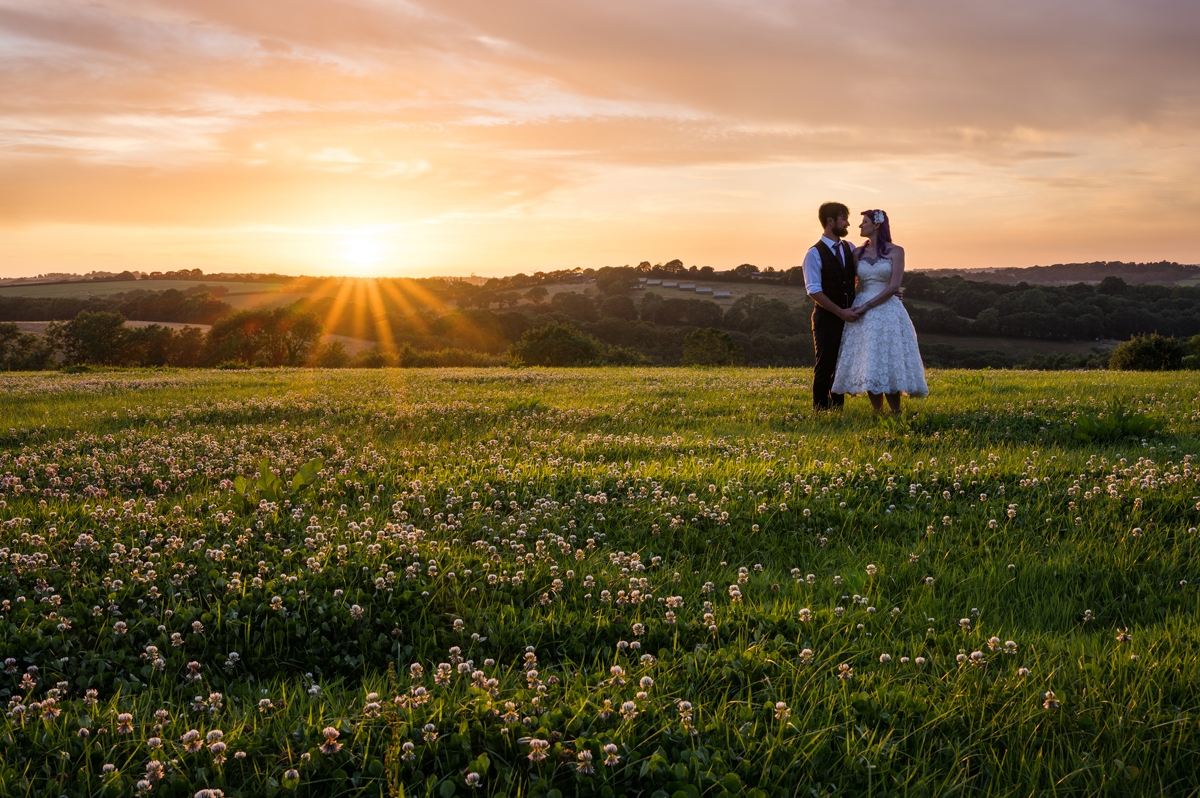 Steph and Laurence's rockabilly-themed wedding at The Oak Barn

Having met as archaeology students in 2013, it was during a visit to Lulworth Cove, while hunting a geocache on a clifftop, that Laurence proposed with Steph’s grandma’s engagement ring. “He didn't even know that it was the day before what would have been her birthday!” says Steph.

Designing a day around a ‘50s/’60s rockabilly theme with a colour scheme of black, white and purple, their idyllic rural venue of choice, The Oak Barn, was the setting for a brilliantly entertaining celebration complete with an all-day rock ‘n’ roll soundtrack. 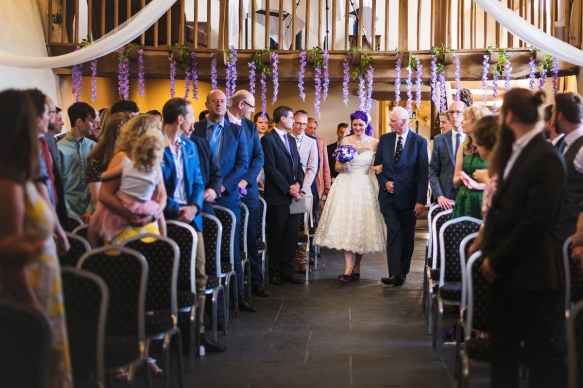 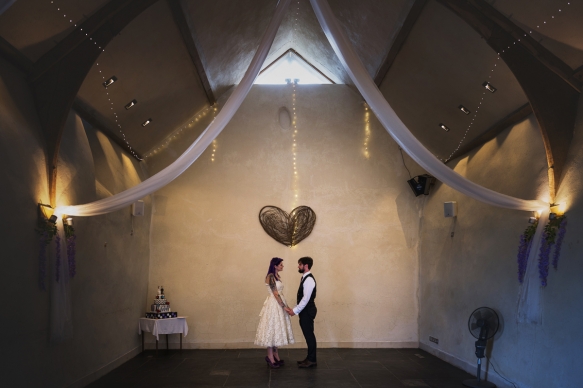 Silk wisteria adorned the barn, and the stationery made by the couple included place settings of vinyl record-style coasters, while tables were named after a rock ‘n’ roll artist with each centrepiece based on a song of theirs. “On the tables were three bottles of wine made by Laurence’s dad and granddad that were named after songs from the artist too,” adds Steph.

“There were so many details that made our day so special to us: the homemade wine, the ammo can for the cards (a nod to geocaching), the guestbook that was a stack of records for people to sign, the homemade signage and table plan. Plus, we had a 'wish you were here' nook with photos of loved ones who have passed,” says Steph of the painstakingly thought-out attention to detail. In keeping with the nostalgic vibe, Steph wore a ‘50s style dress teamed with a vintage inspired hairstyle incorporating victory rolls and pin curls, while Laurence wore a waistcoat made by his granddad. 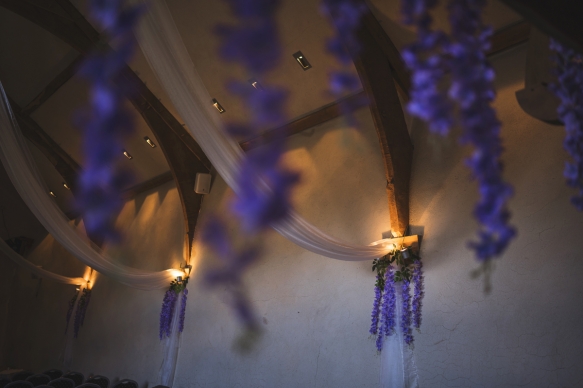 Following the personality-packed ceremony, the newly-weds were showered by petals that Laurence's grandparents had spent two years collecting and drying. The fun then kicked off with a candyfloss machine and lawn games such as giant Jenga, giant Connect-4, limbo, croquet and space hoppers. There was also a ‘Grease Dance Session’, courtesy of Laurence's professional dancer cousin Wendy, who – much to everyone’s delight and amusement – taught guests a variety of ‘50s-style dances.

Refuelling in style with an American diner-influenced meal of hamburgers and sausages in buns accompanied by sharing bowls of gherkins, cheese and salad, guests then enjoyed the likes of knickerbocker glory, banana split and fresh fruit salad for dessert. Later, a milkshake stand and hog roast kept revellers’ appetites at bay, alongside cupcakes and the rockabilly-themed cake that featured swallows, polka dots and stripes. The party continued into the small hours to Steph’s personalised rock, pop, punk and metal playlist.

“My favourite moment was during the meal,” says Laurence when asked to reveal his highlight from the day. “I took a few moments and just realised that every single person was there for us, and found it overwhelming but warming at the same time.”

And Steph’s standout moment? “I loved watching the guests having a fun time, exploring the venue, playing games and mingling,” she announces. “All we wanted was to create a wedding that was fun, with no time where you didn't know what to do with yourself!” 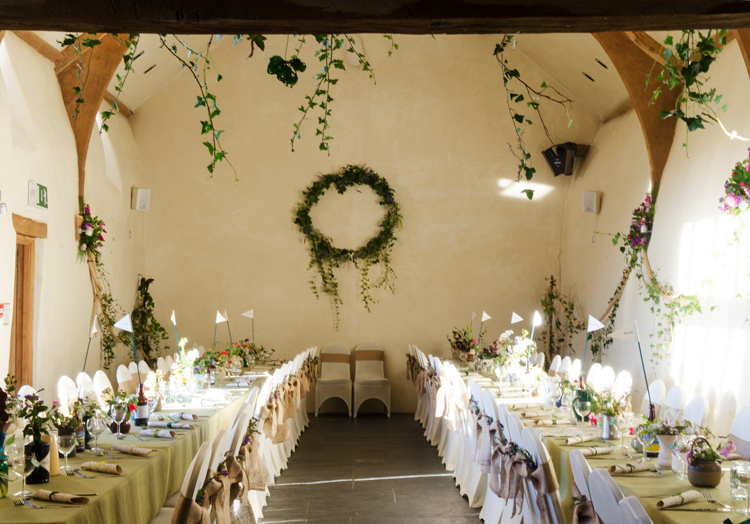 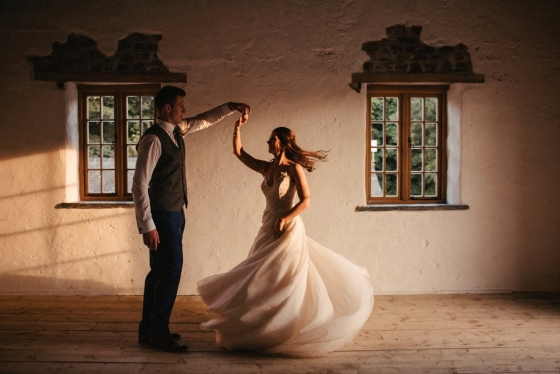 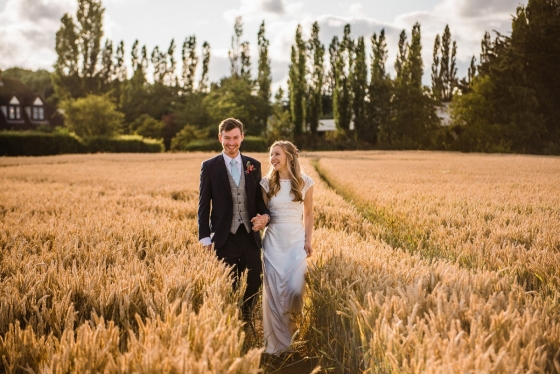 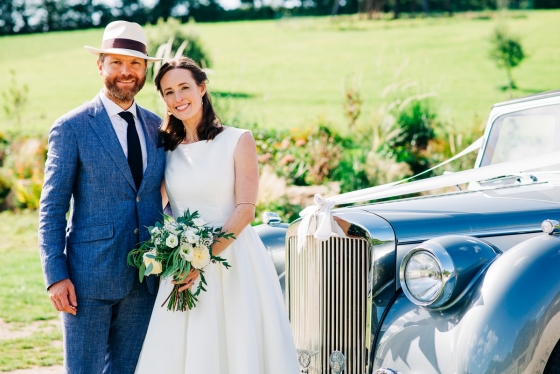 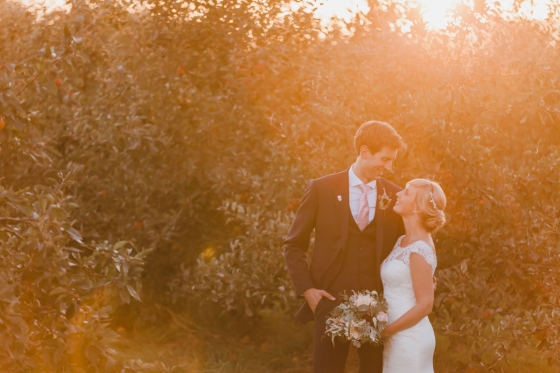 Wedding at The Corn Barn, Devon