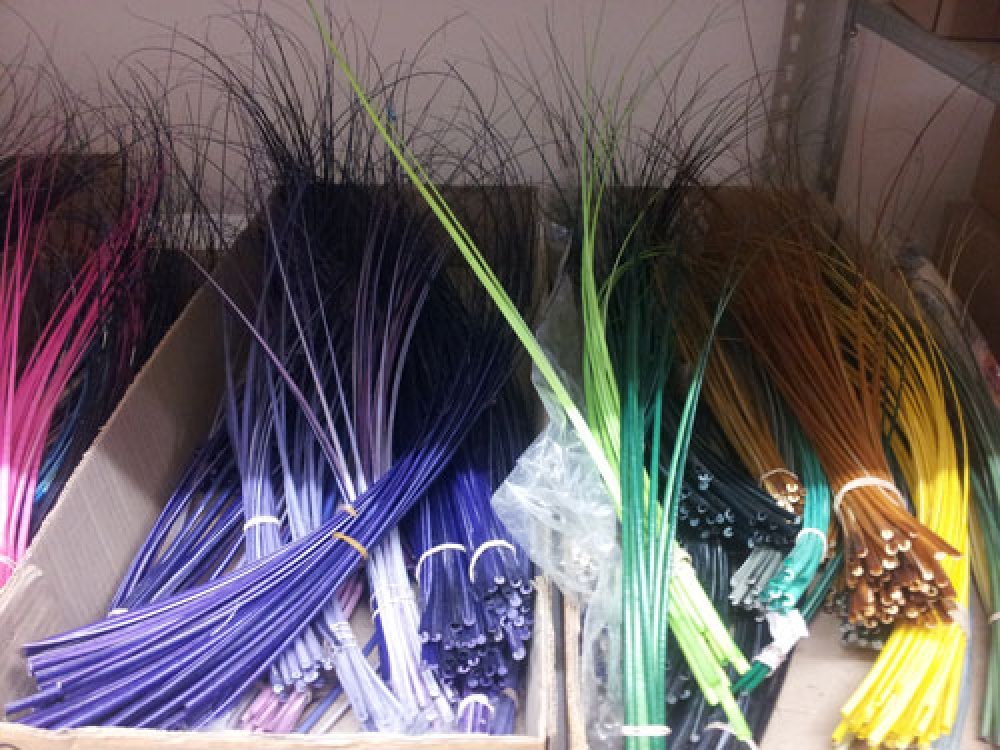 Share on Facebook  Share on Twitter
To be frank, the idea of a Feather Factory may not appeal to the masses. However, for a top milliner like Holly Young, the opportunity to mix it up amongst plumes of magnificent feathers is the enticing equivalent of sending a chocoholic to Willy Wonka's.

Giving an intriguing insight as to how feathered fashion finds its way into the bridal boutiques and beyond, here Holly shares her story...

"I was lucky enough to have an appointment with Dan Jaffe of Jaffe et Fils Ltd in Aximinster, where the buildings are affectionately known by the locals as 'The Feather Factory' - the last surviving feather works in the UK. 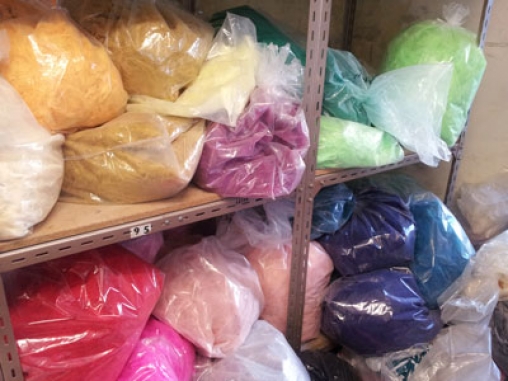 It was started by his parents, Lois and Eric Jaffe after the war and is now run by two of his sons, Ben and Felix. They import all kinds of feathers from all around the world (where the different birds are farmed) as raw material. They then dye, cut and treat the feathers ready for the fashion industry to use in all kinds of creative ways.

As you can imagine, I was very excited to be there and it was a pleasure to be shown round the whole factory.  There were boxes upon boxes of different feathers...orange ostrich feathers, black peacock feathers, turquoise spines - you name it, they had it. They also do all sorts of feather mounts to be used in military regalia and feather Scots Pipers Bonnets for the marching bands. Dan was happily showing me The Hat magazine in which various well known milliners use their feathers and then took me around the rest of the factory to show me how everything was made. 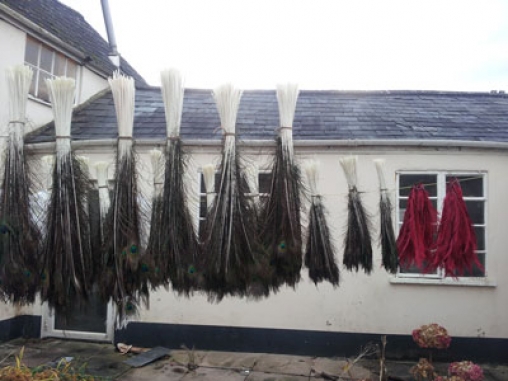 First he took me to the courtyard where on a series of washing lines were bunches of ostrich and peacock feathers hung upside down to dry in the sun. They had been treated and dyed ready to be turned into something magical.

In the warehouse there were bags of Turkey Marabout feathers (soft and fluffy) in every colour of the rainbow, which are used for trims and boas and were like giant multicolored pillows you wanted to jump into - I had to stop myself!

There was a room with some ladies sewing strips of feathers into fringing to decorate costumes with, as well as edge headdresses and trim cushions. Meanhwhile, there were other ladies upstairs trimming and cutting feathers into arrowheads. It's fantastic that everything is done by hand on the premises and that customers are supporting British industries by buying from the factory. 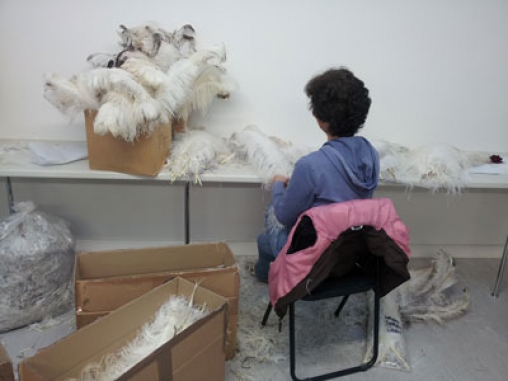 Upstairs there was a warehouse full of all the raw materials, with huge bags full of natural plumage from guinea fowl, partridge, turkey, goose, duck, cockerel, Ring Neck, Lady Amherst and Reeves pheasant. On this floor was a lady stripping and cleaning ostrich feathers who looked very content surrounded by all the fluffy waste from feathers.

Dan explained to me that shortly after the war his father had found a bag of feathers that had been thrown out and that his mother who was very artistic turned them into brooches and sold them at a market. It all started from there.

He explained how the business went from strength to strength but that the increased use of cars with a closed top saw the decline of people wearing elaborate hats, where instead they began to wear hats that were more practical for the smaller space. Yet buses and trams gave more space for a lady to wear large hats with feathers on and business continued to boom.

Today, the family business has recently expanded to a brand new building and though the factory is not open to the public, you can buy fabulous feathers from them via their retail website: www.thefeatherfactory.co.uk" 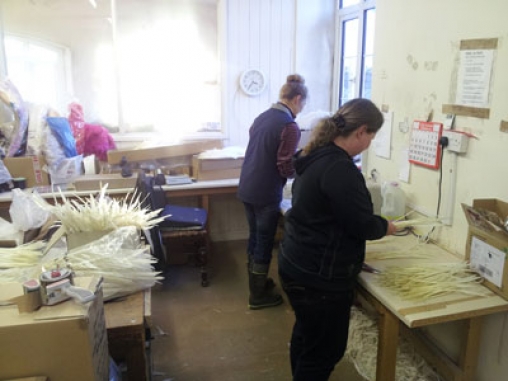