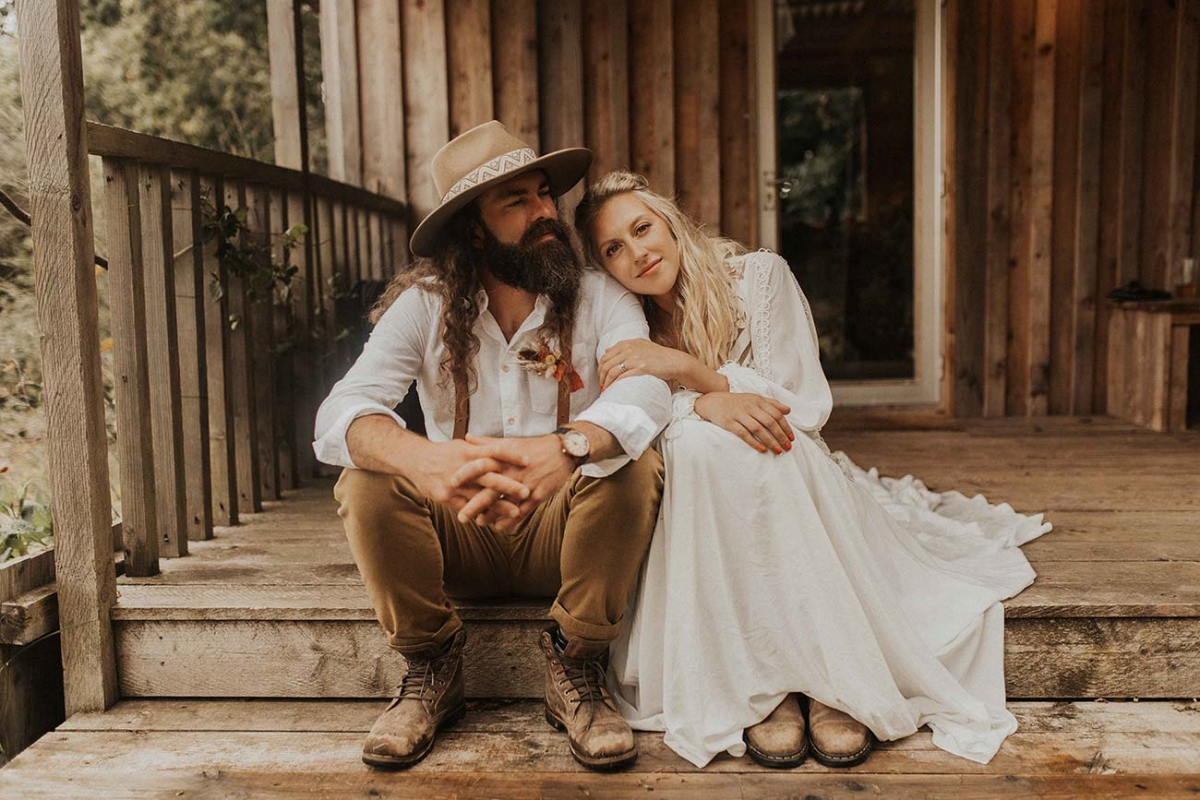 Cassie made the bold first move when she encountered James in a cocktail bar – “I chatted him up then asked him if he wanted my number!” she reveals – but it was James who proposed to her on a balcony in Sorrento. “It was such a moment,” she swoons. 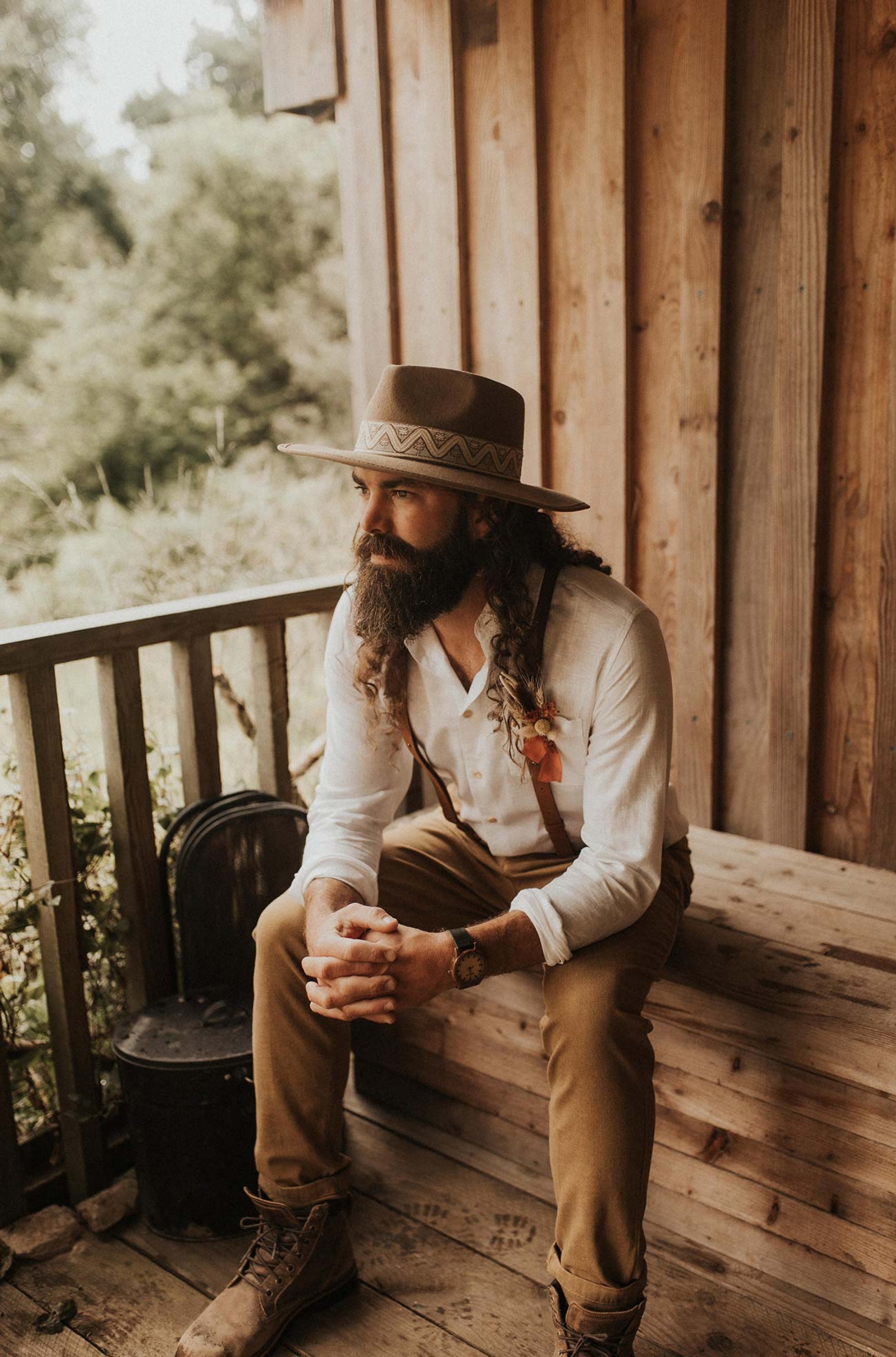 Hayne Devon was the ideal venue for their ‘70s bohemia bash. “We love a ‘70s colour palette, but wanted it to feel rustic and chilled,” explains Cassie. “I had a vision and I knew exactly what I wanted – plus, I'm a natural planner. My sister-in-law helped with decorating the tables and did an amazing job,” she adds of the centrepieces that were hand-foraged, dried and arranged alongside individual potted succulents dotted atop hessian placemats as favours. 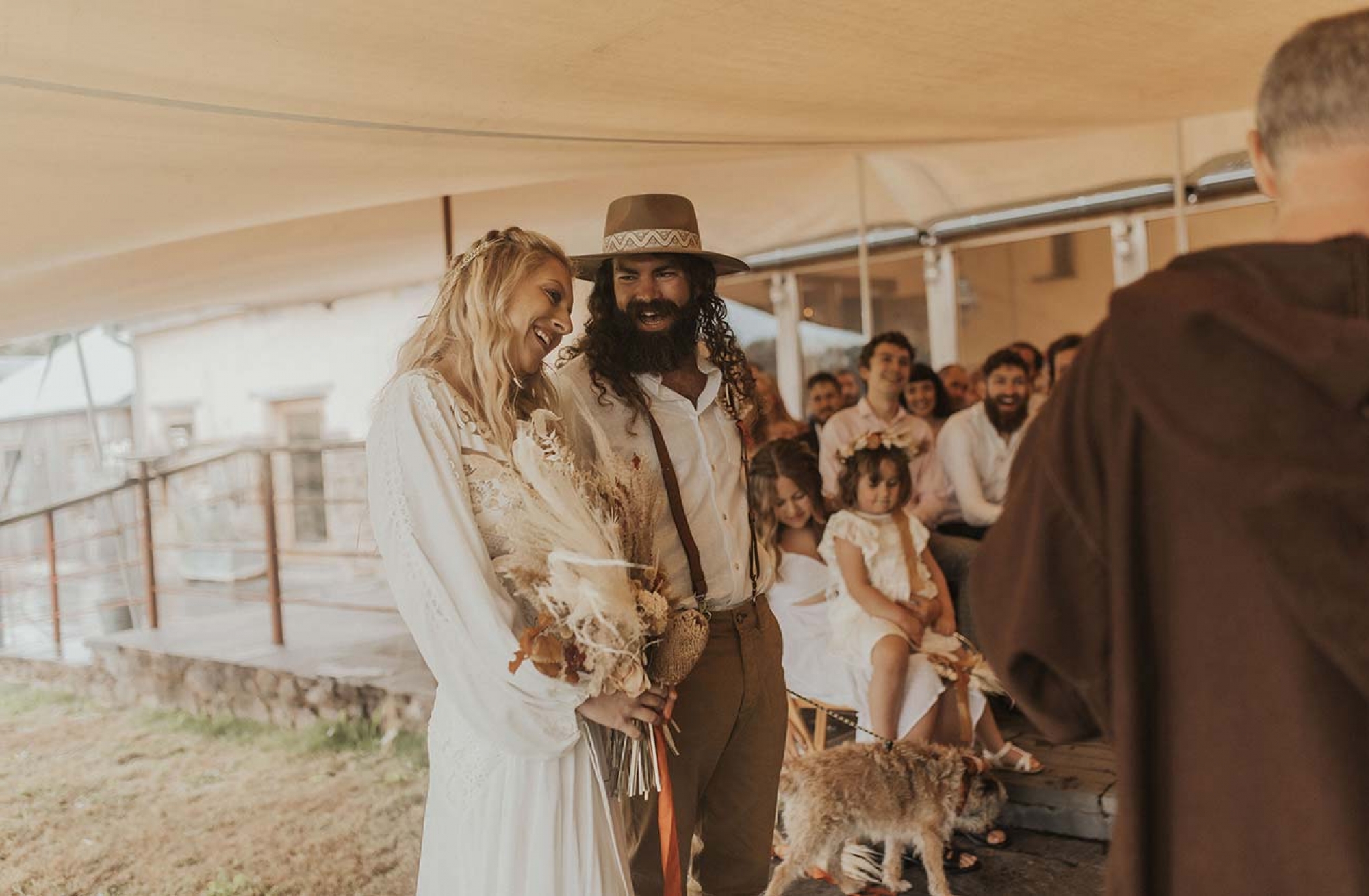 Created by Cassie’s friend Lydia, the stationery was key in helping to set the theme. “I gave her the brief and she made a bespoke ‘70s-style design, which we absolutely loved!” says Cassie. Another friend accentuated the uber-cool aesthetic with the brilliant signage, while the outfits perfectly portrayed laid-back ‘70s prairie style. 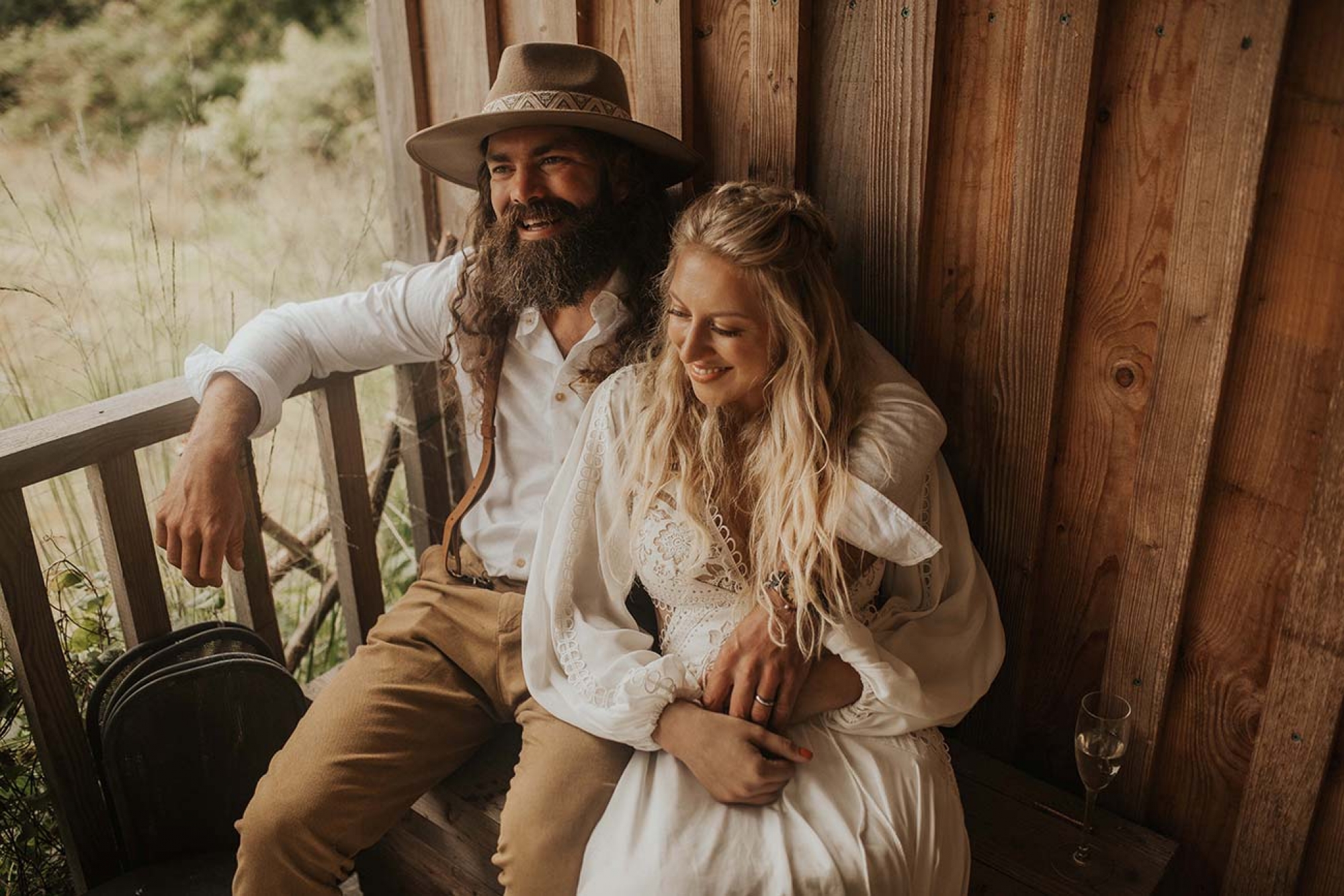 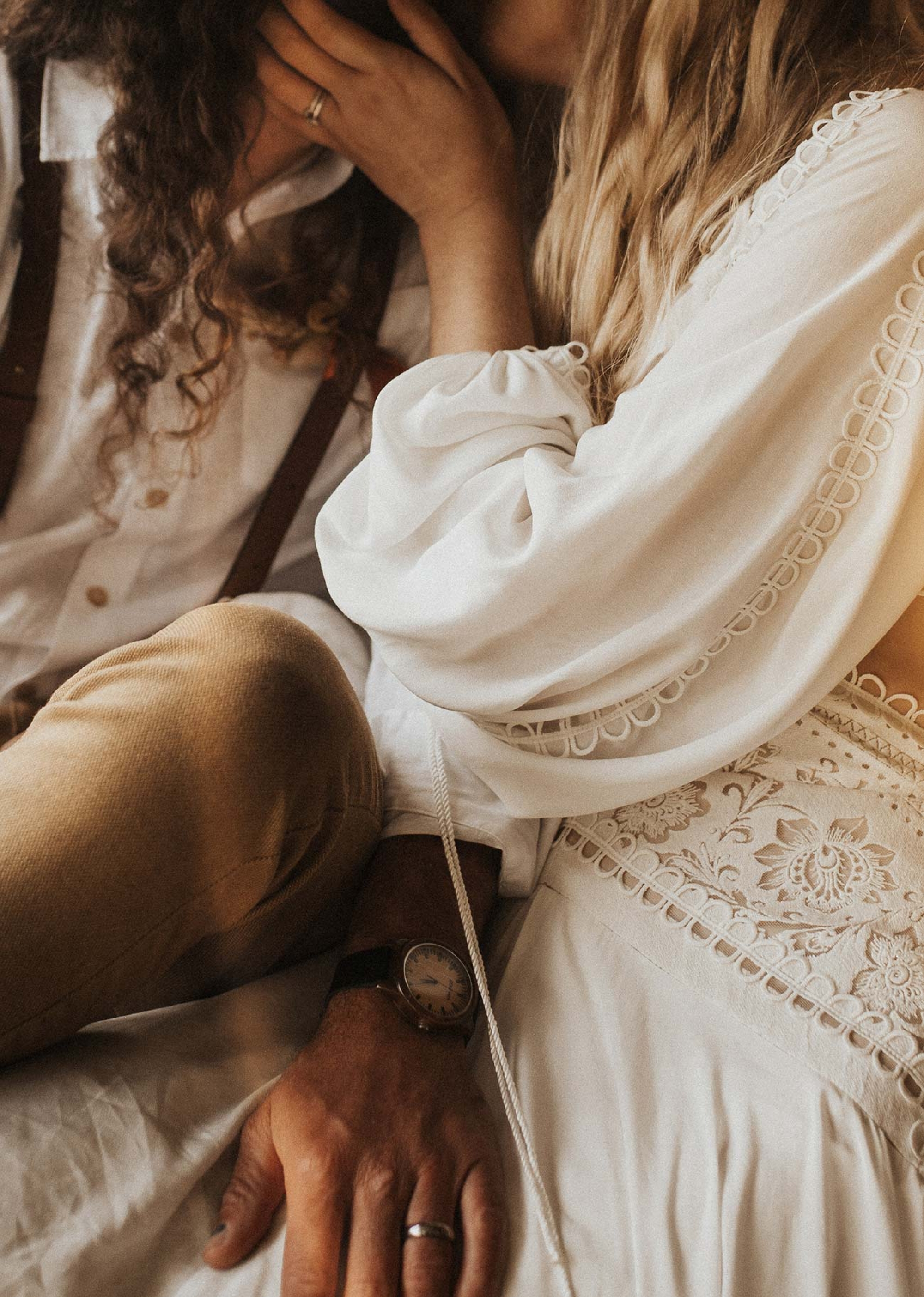 The personalisation continued at the ceremony with the couple’s friend Paul Sharod playing guitar, along with another very special appearance.  “We asked Ben, one of our best pals, if he would do us a blessing as we wanted a personal ceremony on the day,” says Cassie. “He took the whole thing very seriously and even got ordained as a Dudeist minister by The Church of the Latter-Day Dude. It was hilarious!” After becoming officially wed and uniquely blessed, the newly-weds and their guests were treated to a sumptuous menu comprising slow-cooked chicken, smoked salmon, smashed chapa potatoes with chive, veggie and couscous salad, and roasted fireside squash. A day full of eclectic entertainment, Cassie and James ensured that their guests were happy and occupied throughout, courtesy of Sparkle & Co’s fabulous glitter services alongside a photo booth and a host of funky covers from eight-piece brass and percussion party outfit, No Limit Street Band. “My most memorable moment was our first dance, which was to Elton John’s ‘Rocket Man’,” says Cassie when asked to share her highlights. “I was standing on the dance floor waiting (impatiently) for James, wondering where the hell he was. Then he strides in – in an inflatable rocket outfit!” She shares one simple pearl of wisdom when it comes to the wedding planning. “Delegate!” she implores, after designing a day that included the help and talents of many of her and James’ friends and family. “Don’t try to do everything yourself as it becomes overwhelming.”