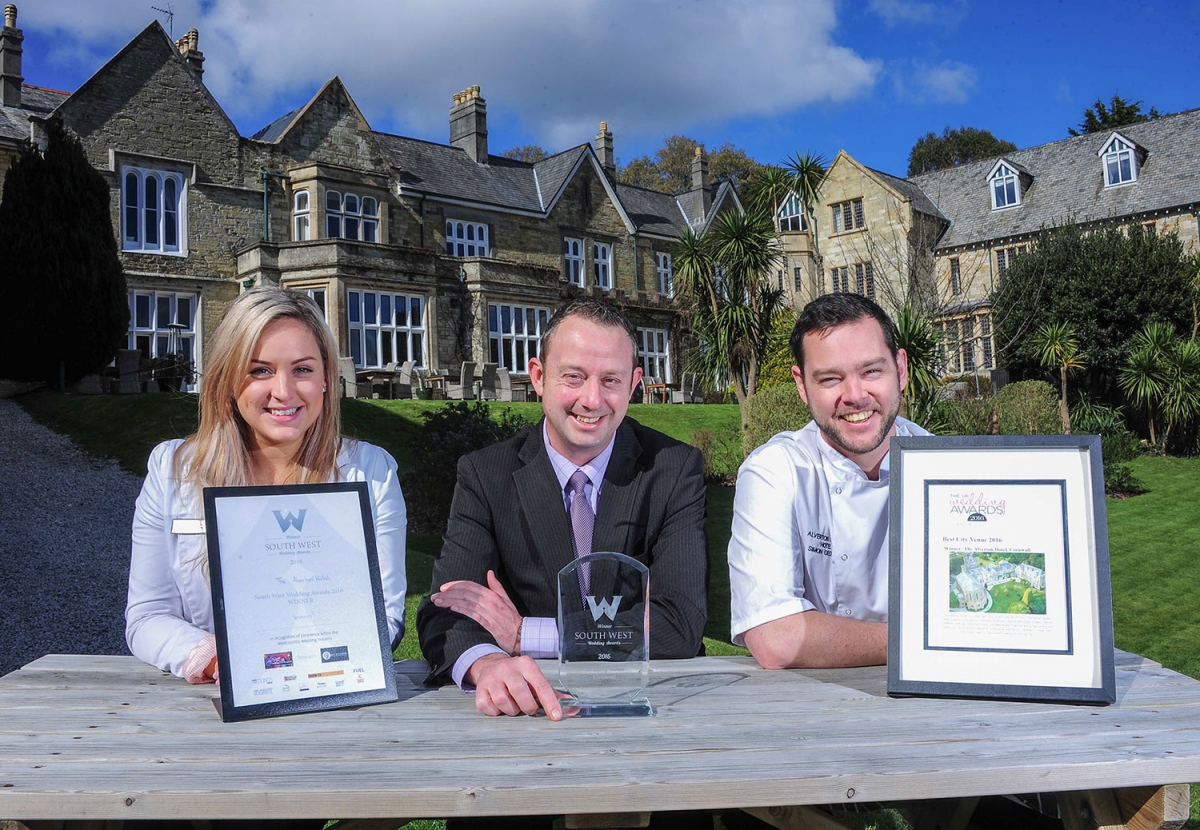 Share on Facebook  Share on Twitter
Huge congrats to The Alverton Hotel in Truro, which has won a prestigious accolade in the UK Wedding Awards just days after winning a top regional industry award!
In the national awards, the hotel was crowned overall winner in the Best City Venue category after beating off competition from across the country. Truro's only four-star hotel was up against places which host weddings in all UK cities. The Alverton was then shortlisted along with 11 other prestigious wedding venues including The Gherkin in London and Queens Hotel in Cheltenham.
The UK Wedding Awards, which are organised by prominent bridal brands including hitched, Perfect Wedding and You & Your Wedding publications, were judged by leading industry experts. The panel shortlisted reader nominations and then sent undercover judges to each of the locations. As well as being city based, the criteria for the category was that all venues had to offer excellent service and fabulous aesthetics inside and out. The UK Wedding Awards' judges commented that The Alverton boasted 'unrivalled levels of service and gorgeous food' and that it was a 'one-of-a-kind setting' for someone's big day.
The national award comes just days after The Alverton was handed the top trophy for Wedding Venue Cornwall in the South West Wedding Awards. It's the second year in a row that the hotel has been given the title in the 'people's choice' awards.

Paul Ricketts, general manager, The Alverton, said: "We are all absolutely thrilled with our recent award wins. The accolades are testament to the whole team's commitment to creating the very best day for all of our bridal parties."
"We were delighted to win the regional Wedding Venue Cornwall award for the second time and then to learn we had also won in the UK Wedding Awards as well really was an honour. We were up against some tough competition in both awards and are so proud of the comments we received from both the judges and those who voted for us - thank you."
As well as boasting an impressive Great Hall, which has the potential to host up to 100 guests, The Alverton offers a range of luxurious accommodation options. In June a new 15-bedroom extension will be unveiled; The Courtyard will bring the hotel's capacity up to 50 bedrooms.

The hotel's brasserie, which is open daily to non-guests, serves a wide range of British flavours expertly cooked and acclaimed afternoon teas.  There's also a stylish bar which serves up some of Truro's most celebrated cocktails. We suggest you pay a visit pronto!