How To Have A Feminist Wedding

Struggling to reconcile your feminist ideals with the implications and traditions of being a bride?

I have a conundrum: I'm getting married and consider myself a feminist (equality for men and women, yay). I like to believe these things are not mutually exclusive but, as I delve deeper into the world of wedding traditions, I'm starting to wonder if that's possible. After countless hours of research and pondering, here is my hodgepodge of a plan to try and manage both, sanely. 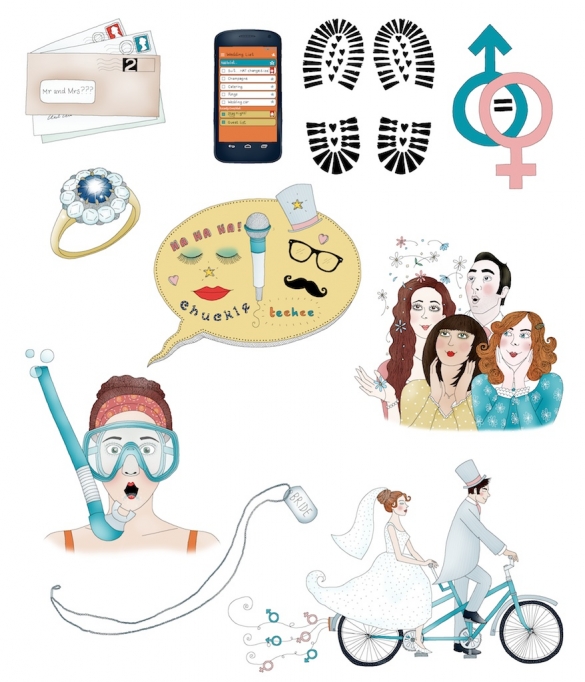 A new identity
Oh, the old 'giving up your identity' chestnut, how ye have plagued me. On the one hand, for simplicity's sake, I'd rather just take his name. But on the other I think, why should I? Why is it always expected that the woman should toss away her identity and take on someone else's as soon as the ring is on?

I've discussed this at length with my fiance, Kyle, and we briefly entertained the idea of going double barrel, before realising either order of our last names sounds utterly ridiculous. We also thought about merging them together à la Dawn O'Porter (nee just plain Porter before she married Chris O'Dowd), but both Dreed and Revier sound like weapons of torture, which neither of us were particularly keen on.

Eventually - mainly out of exhaustion - I have decided to keep my name professionally and use his for personal matters. I'm well aware my carefully constructed plan will probably be shattered when I realise how complicated it is. And let's not even mention hypothetical children.

Flower power
To me, the bouquet throw seems like an integral part of the day. But the image of my female pals being singled out and forced to faux fight over it, only to have the winner's other half jokingly groan, sounds unbearable. And yes, this may be a trifle shallow, but I don't want pretty flowers going to waste. So my plan is to cut the bouquet before I throw it and shower those around me in a waterfall of flowers, so everyone is included (I'll be sure to pick a non-thorny variety).

Bridezilla
Weddings are still considered the woman's domain, with men being allowed the odd inconsequential decision. You only have to look at shows like 'Don't Tell The Bride' to see this in full swing. Hapless men are handed the reins and fluster and bluster their way through the wedding preparation, while the bride seems a few steps off self-combusting out of frustration. It's hammed up, sharply edited and plays perfectly to the stereotype that, when it comes to weddings and women, it's their way or the highway.

But not in our household, oh no! Kyle is detail-orientated and a big fan of to-do lists. I'm better at the bigger picture malarkey and finances. So it makes sense that we both get involved in the areas we're better at. And, if anyone dares utter the word 'Bridezilla' in my general direction, my wrath shall be seen!

Will you marry me?
We'd talked about getting married before we got engaged, so it was definitely on my radar. Had a proposal been sprung on me, I may well have had a heart attack. But I imagine those less neurotic than myself may enjoy the spontaneity of it. Not I. So, while he definitely did the proposing, it had been discussed and agreed beforehand.
And, in all honesty, it is one of my favourite memories. We were snorkelling off the coast of Majorca and I was taking underwater photographs of some fish. He called me over to take a photo of him and, as I went to take the picture, he pulled out the engagement ring. It was perfect. Apart from swallowing a metric tonne of seawater between us. Shocked faces, glee and seawater do not go together.

Sparkle sparkle
I have a problem with engagement rings. Why are females expected to publically declare their relationship status 24/7, but males not until after they're married? When we got engaged, we both tried wearing a ring, for equality's sake. This failed on several levels. For one, Kyle can't bear wearing any form of jewellery; it agitates him. And I got a little bored of wearing the same ring every day.

I now occasionally wear a sapphire and gold ring on my ring finger, which I raided from my nan's jewellery box, but it's off as much as it's on!

Permission slip
It was important to me that my family liked Kyle; that's why I made sure they met up and got to vet him long before we got engaged! Luckily for everyone involved, they got along famously. So personally, I wasn't bothered about getting anyone's permission to get married. It seemed pretty outdated.

However, at dinner with Kyle and my dad, we'd had one or four drinks by the time I'd nipped out to the loo and Kyle told/asked/slurred his intentions. Apparently my dad - unable to contain his elation - ran to the men's room and rang my mum to tell her immediately. Now I think it's quite a sweet anecdote, probably more because of the way in which it was done - more as tipsy gossip than a formal request.

Beat the bulge
As soon as I changed my status to 'engaged' on Facebook, the onslaught began. 'Bridal boot camps', 'Lose weight for your big day' and - let's at least give it points for conciseness - 'Get hot quick!' The pressure for women to shift pounds for the big day is real.

Even my mum experienced this back in the '80s when, on her last fitting, the dressmaker proclaimed: "We'll have to let this out. Gosh, most people try and lose weight before their wedding, not put it on!" The fact that my tiny mum barely tips the scales at 100lbs just shows your BMI is irrelevant when it comes to this expectation; everyone should make an effort. Really, it's just an extension of the societal pressure for women to be as slim as possible. And on your wedding day? Even slimmer please!

I'm not naive. I understand everyone wants to look their absolute best on their wedding day and I am no exception. But I will not be exclusively consuming kale and undertaking torturous boot camps in the lead-up. Rather, I'll be using it as an excuse to indulge in lots of spa treatments.

Down the aisle we go
Described out loud, the tradition of being 'given away' sounds incredibly antiquated. The idea of being passed on from one man to another just seems so archaic and at odds with the 21st century.

But I really do like the idea of having my immediate family involved in the ceremony. No doubt I will be a bag of nerves before walking down the aisle, and my parents have always been good at the old advice shtick. So I plan on having both of them walk me down the aisle.

Speech
The groom, best man and father of the bride are all expected to give speeches while the bride smiles silently, adoringly on. Here I reveal my contrary nature: I don't actually want to give a speech - because I don't want to be a sweaty, nervous wreck. But I can't bear the thought of it being an all-male monologue.

I've asked my lovely godmother (who is braver then me when it comes to large crowds and forming coherent sentences) to say something. Not just because she is a woman (and therefore diversifies the genders agreeably), but, rather, she is charming, funny and I would love for her to play a bigger part in the day.

So, as you can see from my pick-and-choose-style plans, I think the key to getting hitched and keeping your feminist side in check is to keep the important bits and not be afraid to alter or even omit others. If Gloria Steinem managed it, I think we all can!